The 22-year-old has been a standout, consistent centre for Cardiff Met RFC during his time in the Welsh capital and now heads to London following the completion of his studies.

Northmore, who can play at either 12 or 13, played his early rugby at Tavistock RFC in Devon, and has been a steady performer for the university side for the past three years.

He said: “I have really enjoyed watching Alex play at Harlequins this season and heard first-hand what a great culture there is at the club.

“It is a great club with an amazing history – but I know Paul Gustard is now looking to create history of his own there by winning more silverware. It is a very exciting time.” 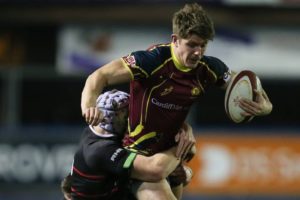 Gustard, Harlequins’ head of rugby, said: “I am very pleased to be welcoming another Cardiff Met graduate to the squad and look forward to the contribution Luke will make at Harlequins in the coming seasons as we look to be consistently competitive.

“Luke is an impressive young man who has terrorised defences at university. We are excited by his potential and believe he has the ability and the mental fortitude to develop his game and have a successful career.

“He is sure to excite our fans with his ability to play through the line, control contact and create opportunities.”

Northmore previously came under the spotlight when his try back in a 2017 Championship clash with Glynneath attracted the attention of former Wales and British and Irish Lions legend, Martyn Williams.